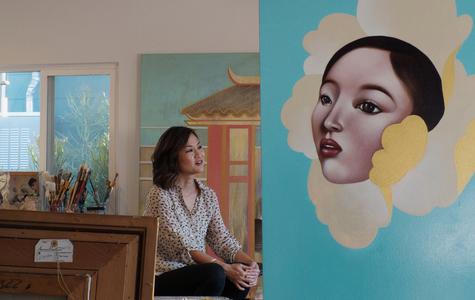 My work investigates notions of cultural identity from a kaleidoscopic perspective, a continual shift of idiosyncratic translations and slippage. The contemporary American landscape is where I explore how cultural tropes are imported, disassembled, and then reconstructed. In an overwhelmingly diverse metropolis such as Los Angeles, images flood our social lens, taking on multiple [mis]interpretations. Becoming American cannot be painted in broad strokes. It is a personal experience that is complicated, messy, and certainly not easy. Understanding my family’s living history as refugees from both Vietnam and Cambodia and inspired by research and interviews with people with a shared history, I try to uncover the complex layers of cultural assimilation and forging new identities. It is more than just donuts and pink boxes. It is about being able to tell our own stories before they are told for us. It is about sharing our humanity when we are veiled by inhumanity.

Resistance Aunties, Center for Creativity and the Arts at Fresno State University, February 2020

Art in Embassies Program, among selected artists to exhibit at the U.S. Embassy in Phnom Penh, Cambodia during the tenure of Ambassador Carol Rodley, 2009 –2012